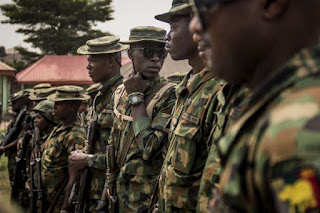 The Nigerian Army has described the rumor making the rounds in the social media that the Boko Haram terrorists are better paid than soldiers as very shameful.

Upload Music
The army says it was most shameful that the claims were coming from a member of the Presidential Committee on the North East Initiative, Dr Sidi Ali Mohammed.
Mohammed had, in lecture he presented, disclosed that terrorists get a daily pay of $3,000 as against Nigerian soldiers who earn N1,000 daily.
The army said Mohammed “must have been associated with the terrorists group beyond what he may want the public to know for having the knowledge of how much a terrorist earns per day to commit atrocities against fellow Nigerians and other innocent people, including women and children.”
Acting director army public relations, Colonel Saghir Musa, who made this known in a statement, described Mohammed’s claims as deliberate attempt not just to demoralize the patriotic soldiers in the war front but also a way of luring the gullible Nigerian youths to join the terrorists.
Musa said the army would “take the necessary steps to formally report him to the appropriate authorities to further substantiate these unfounded allegations.
“It is also criminal and preposterous to compare the gallant soldiers of our Armed Forces with the rag tag terrorists’ criminal gang.  Indeed, there is no such basis at all between the outlawed criminal terrorists, who commit crime against humanity and our highly patriotic, courageous and brave soldiers whose sacrifice cannot be quantified.
“Over time, we have been alerting the world that the menace of Boko Haram terrorism is being aided and abetted by sympathizers such as Dr Sidi Ali Mohammed.
“His statement could be part of the deliberate attempt to demoralise the patriotic soldiers serving their fatherland so that the terrorists will take advantage of it.  It is also a way of swaying the gullible youths to believe the lies of Boko Haram terrorists as being peddled by him.
“Therefore, we are calling on all Nigerians to discountenance the statement credited to Mohammed while we take necessary steps to formally report him to the appropriate authorities to further substantiate these unfounded allegations.