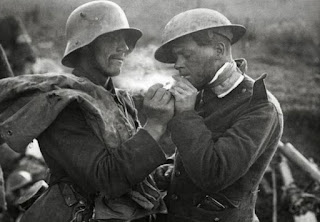 When Peace Breaks Out

By James Banks for ODB

Peace to those on whom his favor rests.

On a cold Christmas Eve in Belgium in 1914, the sound of singing floated from the trenches where soldiers were dug in. Strains of the carol “Silent Night” rang out in German and then in English. Soldiers who earlier in the day had been shooting at each other laid down their weapons and emerged from their trenches to shake hands in the “no man’s land” between them, exchanging Christmas greetings and spontaneous gifts from their rations. The ceasefire continued through the next day as the soldiers talked and laughed and even organized soccer matches together.

The Christmas Truce of 1914 that occurred along World War I’s Western Front offered a brief glimpse of the peace the angels proclaimed on the first Christmas long ago. An angel spoke to terrified shepherds with these reassuring words: “Do not be afraid. I bring you good news that will cause great joy for all the people. Today in the town of David a Savior has been born to you” (Luke 2:10–11). Then a multitude of angels appeared, “praising God and saying, ‘Glory to God in the highest heaven, and on earth peace to those on whom his favor rests’” (vv. 13–14).

Jesus is the “Prince of Peace” who saves us from our sins (Isaiah 9:6). Through His sacrifice on the cross He offers forgiveness and peace with God to all who trust in Him.

How have you experienced the peace Jesus provides? In what practical way can you share His peace with someone today?

Prince of Peace, rule in my heart today. I praise You for Your perfect peace that this world can never take away!

In Luke 2, we learn that shepherds were the first to hear the announcement of Jesus’ birth (vv. 8–20). Shepherds were considered to be in a low social class, especially those who were in the fields at night (v. 8), and they were often viewed as unclean. Scholars suggest that shepherds were the first to see Jesus for the following reasons. First, the shepherds in the field reflect humans living their regular lives. Second, Jesus came to save everyone, including the lowly and outcast. Finally, it reminds us that Jesus is the messianic Shepherd who came to save the lost.