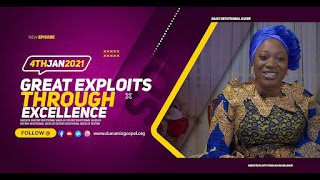 Then this Daniel was preferred above the presidents and princes, because an excellent spirit was in him; and the king thought to set him over the whole realm.
Daniel 6:3.

Daniel was a man of great exploits because he embraced the lifestyle of excellence.

Previously, we saw that Our God is in search of people of excellence who would display His character of excellence to the world (Matthew 5:14-16). We also saw that God found Daniel as a person of excellence, and Daniel distinguished himself in his generation.

Beloved, through the vehicle of excellence, God lifted Daniel to a realm of relevance in both the Kingdom of God and the kingdom of men (Daniel 5:11-31). Through excellence, Daniel became a man of perpetual relevance who outlived four kings(Daniel 1:21, Daniel 6:28). Daniel made great impact; he changed the law of the land and made the king and the entire Babylonian Empire to recognize the living God (Daniel 6:25-27).

The angels of God shut up the mouths of the lions; God did not allow the enemies of Daniel to prevail over him even when they threw him into the lion’s den(Daniel 6:21-24).

My counsel is, embrace the lifestyle of excellence and distinction. Refuse to be a nonentity; have nothing to do with mediocrity.

Remember this: Daniel was a man of great exploits because he embraced the lifestyle of excellence.

1. Crave for existence in excellence and distinction.

2. Ask God for the fresh baptism of the Spirit of excellence.

O Lord, I ask that You baptise me afresh with the Spirit of excellence in Jesus’ Name.

FOR FURTHER UNDERSTANDING, GET THIS MESSAGE: THE PATHWAY OF EXCELLENCE (PART 1).

The way of excellence, at any moment, is higher than the way of mediocrity. It will produce greater opportunities, prosperity, possibilities, security and authority than compromise. Culled from “WHO ARE YOU?” by Dr Paul Enenche.

A dog’s shoulder blades are unattached to the rest of the skeleton to allow greater flexibility for running.

Flow in the new year with the spirit of excellence in Jesus’ Name.