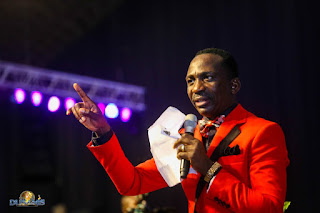 Grace be with all them that love our Lord Jesus Christ in sincerity. Amen.
Ephesians 6:24.

Many years ago, someone invited me to join two people in marriage but the lady was already three months pregnant, and I didn’t know. Now, this was before pregnancy testing before marriage officiating became mandatory. And this was also in another ministry. That man literally began a new journey on the foundation of disaster. The pregnancy was hiding inside her wedding gown. You know, there are people whose three months’ pregnancy would look as if they are not pregnant at all.

So, I went to join them and after six months, the lady gave birth. When I heard that she had given birth, I asked them, Was it a premature birth? They answered, “No sir. We are sorry sir.” What! Then I asked them, “You invited me to officiate a wedding in which the bride was already three months pregnant? But I asked you to say any reason why you may not be joined together? And you said that there was no reason. This is very terrible!”

Beloved, it does not matter the gravity of a lie; all liars, including those who lied to pastors at the point of joining them in marriage, shall have their part in the lake of fire (Revelation 21:8)

The reason why Saul was not pardoned was because he never opened up to God. However, despite all the atrocities David committed, when God confronted him, he confessed and opened up to Him instantly.

Beloved, sincerity increases grace (Ephesians 6:24). Honesty brings grace; deception or crookedness destroys the anointing and you need the anointing to fulfil your destiny.

Remember this: Sincerity increases grace; deception or crookedness destroys the anointing, and you need the anointing to fulfil your destiny.

1. Attract the grace of God by sincerity.

2. Be sincere before God when you fall and don’t cover your sins.

O Lord, help me to maintain sincerity before You always, in Jesus’ Name.

FOR FURTHER UNDERSTANDING, GET THIS MESSAGE: DEADLY ENEMIES OF DESTINY (PART 4).

When God sees a person living a lie, and behaving a lie; when He sees hypocrisy, He hates it with a passion, because He is the embodiment of truth. Culled from “WHO ARE YOU?” by Dr Paul Enenche.

If you keep a goldfish in a dark room, it will become pale!

The Lord deliver you from every consequence of past lies, deception or sincerity in Jesus’ Name.