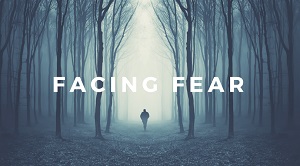 By Sheridan Voysey for ODB

When I am afraid, I put my trust in you.

Warren moved to a small town to pastor a church. After his ministry had some initial success, one of the locals turned on him. Concocting a story accusing Warren of horrendous acts, the man took the story to the local newspaper and even printed his accusations on pamphlets to distribute to local residents by mail. Warren and his wife started praying hard. If the lie was believed, their lives would be upended.

King David once experienced something similar. He faced an attack of slander by an enemy. “All day long they twist my words,” he said, “all their schemes are for my ruin” (Psalm 56:5). This sustained assault left him fearful and tearful (v. 8). But in the midst of the battle, he prayed this powerful prayer: “When I am afraid, I put my trust in you. . . . What can mere mortals do to me?” (vv. 3–4).

David’s prayer can be a model for us today. When I am afraid—in times of fear or accusation, we turn to God. I put my trust in you—we place our battle in God’s powerful hands. What can mere mortals do to me?—facing the situation with Him, we remember how limited the powers against us really are.

The newspaper ignored the story about Warren. For some reason, the pamphlets were never distributed. What battle do you fear today? Talk to God. He’s willing to fight it with you.

What real fears do you face? How can David’s prayer help you deal with them?

Loving God, I’m afraid—and so today I put my trust in You. What can mere mortals do to me when You’re fighting for me? Thank You for the coming victory.