Catholic Daily Reading + Reflection: 22 March 2021 – Let Him Who Is Without Sin Cast The First Stone

Entrance Antiphon ct. Ps 56:2
Have mercy on me, O God, for people assail me; they fight me all day long and oppress me.

Collect
O God, by whose wondrous grace we are enriched with every blessing, grant us so to pass from former ways to newness of life, that we may be made ready for the glory of the heavenly Kingdom. Through our Lord. . .

R. Though I should walk in the valley of the shadow of death,
no evil would I fear, for you are with me.

The Lord is my shepherd; there is nothing I shall want.
Fresh and green are the pastures where he gives me repose.
Near restful waters he leads me; he revives my soul. R.

He guides me along the right path,
for the sake of his name.
Though I should walk in the valley of the shadow of death,
no evil would I fear, for you are with me.
Your crook and your staff will give me comfort. R.

R. Though I should walk in the valley of the shadow of death,
no evil would I fear, for you are with me.

You have prepared a table before me
in the sight of my foes.
My head you have anointed with oil;
my cup is overflowing. R.

Surely goodness and mercy shall follow me
all the days of my life.
In the Lord’s own house shall I dwell
for length of days unending. R.

Let him who is without sin among you be the first to throw a stone at her.
A reading from the holy Gospel according to John (John 8:1-11)

At that time: Jesus went to the Mount of Olives. Early in the morning he came again to the temple; all the people came to him, and he sat down and taught them. The scribes and the Pharisees brought a woman who had been caught in adultery, and placing her in their midst they said to him, Teacher, this woman has been caught in the act of adultery. Now in the law Moses commanded us to stone such. What do you say about her? This they said to test him, that they might have some charge to bring against him. Jesus bent down and wrote with his finger on the ground. And as they continued to ask him, he stood up and said to them, Let him who is without sin among you be the first to throw a stone at her. And once more he bent down and wrote with his finger on the ground. But when they heard it, they went away, one by one, beginning with the eldest, and Jesus was left alone with the woman standing before him. Jesus looked up and said to her, Woman, where are they? Has no one condemned you? She said, No one, Lord. And Jesus said, Neither do I condemn you; go, and do not sin again.

Light is an important symbol in the celebration of the Feast of Terbernacles or Booths. By proclaiming that He is the light of the world, Jesus declares Himself to be the true fulfilment of the Tabernacles of Joy and hope. The lights at the feast illuminate only the city of Jerusalem, but Jesus illuminates the whole world. The response to this light can be one of two: One can opt to follow the light and so have the light of life, or choose to walk in darkness. The choice between light and darkness exists even today. There are numerous times when we too choose darkness over light because it is more appealing and convenient, as Jesus’ opponents do. If, like Jesus, we are able to see beyond the merely physical and reognise light for what it is, we will always opt for the light. How will you show today that you have opted for light and not darkness.

The world is a noisy place and if we do not try to seek solitude we will be lost in the noise and will be unable to connect with God, pray to Him and listen to Him speak to us. Silence, both interior and exterior is very urgently needed in this time and age, because it helps us to pray well and more importantly to hear God when He speaks to us and if we hear Him and act in accordance to His guidance we will not be deafened by the noise of the world.

Today, try and access how noisy you have become. Work on yourself by seeking solitude. Try to have a quiet time where you can be alone with God and straighten your rough paths.

Lord, give me the grace to hear you daily in all my activities 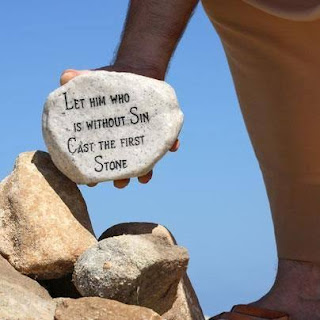