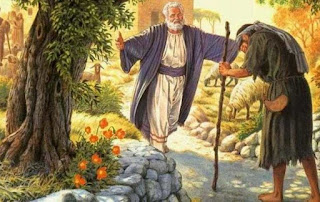 Shepherd your people, [O Lord,] with your staff, the flock of your inheritance, who dwell alone in a forest in the midst of a garden land; let them feed in Bashan and Gilead as in the days of old. As in the days when you came out of the land of Egypt I will show them marvellous things. Who is a God like you, pardoning iniquity and passing over transgression for the remnant of his inheritance? He does not retain his anger forever because he delights in mercy. He will again have compassion upon us, he will tread our iniquities under foot. You will cast all our sins into the depths of the sea. You will show faithfulness to Jacob and mercy to Abraham, as you have sworn to our fathers from the days of old.

R/. The Lord is compassionate and gracious.

It is the Lord who forgives all your sins,
Who heals every one of your ills,
who redeems your life from the grave,
who crowns you with mercy and compassion. R/.

R/. The Lord is compassionate and gracious.

For as the heavens are high above the earth,
so strong his mercy for those who fear him.
As far as the east is from the west,
so far from us does he remove our transgressions. R/.

VERSE BEFORE THE GOSPEL Luke 15:18

At that time: The tax collectors and sinners were all drawing near to hear Jesus. And the Pharisees and the scribes murmured, saying, “This man receives sinners and eats with them.” So he told them this parable: “There was a man who had two sons; and the younger of them said to his father, ‘Father, give me the share of property that falls to me. ’ And he divided his living between them. Not many days later, the younger son gathered all he had and took his journey into a far country, and there he squandered his property in loose living. And when he had spent everything, a great famine arose in that country, and he began to be in want. So he went and joined himself to one of the citizens of that country, who sent him into his fields to feed swine. And he would gladly have fed on the pods that swine ate; and no one gave him anything. But when he came to himself he said, ‘How many of my father’s hired servants have bread enough and to spare, but I perish here with hunger! I will arise and go to my father, and I will say to him, “Father, I have sinned against heaven and before you; I am no longer worthy to be called your son; treat me as one of your hired servants.”’ And he arose and came to his father. But while he was yet at a distance, his father saw him and had compassion, and ran and embraced him and kissed him. And the son said to him, ‘Father, I have sinned against heaven and before you; I am no longer worthy to be called your son. ’ But the father said to his servants, ‘Bring quickly the best robe, and put it on him; and put a ring on his hand, and shoes on his feet; and bring the fatted calf and kill it, and let us eat and make merry; for this my son was dead, and is alive again; he was lost, and is found.’ And they began to make merry. “Now his elder son was in the field; and as he came and drew near to the house, he heard music and dancing. And he called one of the servants and asked what this meant. And he said to him, ‘Your brother has come, and your father has killed the fatted calf, because he has received him safe and sound.’ But he was angry and refused to go in. His father came out and entreated him, but he answered his father, ‘Behold, these many years I have served you, and I never disobeyed your command; yet you never gave me a kid, that I might make merry with my friends. But when this son of yours came, who has devoured your living with harlots, you killed for him the fatted calf!’ And he said to him, ‘Son, you are always with me, and all that is mine is yours. It was fitting to make merry and be glad, forth is your brother was dead, and is alive; he was lost, and is found.”’

The Gospel of the Lord

Jesus was “guilty” of fraternizing and socializing with the wrong kind of people: tax collectors and sinners. The “good people”, i.e. the Pharisees and scribes, were scandalized. In their mind, Jesus had no business keeping company with such deplorable people. They had forgotten the message of the Prophet Micah. Otherwise, they would have known that God was a merciful God, “pardoning iniquity and passing over transgression.” The parable of the “Prodigal Son” illustrates that perfectly. Today’s sinners can take heart from the fact that their sins will be forgiven the moment they leave the “far country” to return to the Father’s house, the moment they repent.

– If it were given to a man to see virtue’s reward in the next world, he would occupy his intellect, memory and will in nothing but good works, careless of danger or fatigue.

Pride, they say, goes before a fall and the more we try to rise without God, the more we get to our destination realising that we have done an exercise in futility. The way up, is down; and Jesus showed us that example when he humbled Himself and took our form in order to redeem us. (Phil 2:6-11) If we must be Christians after the mind of Christ, we must resolve to humble ourselves in words and action and do things the Jesus’ way.

Today, resolve to act humbly by speaking kindly to those who work with you and if possible give them a helping hand to do the things you would have barked or yelled at them to do.

Lord Jesus, give me a very large heart, purge away from me all bitterness, all past pains, all hatred and all forms of evil intentions against others. Amen.