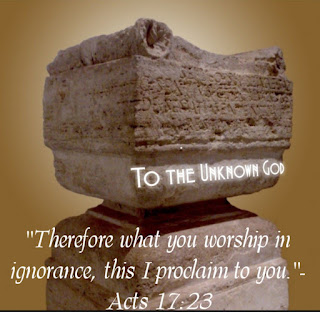 IBADAN: Tomorrow is the 26th Anniversary of the episcopal ordination of Most Revd Gabriel O. Abegunrin, 13th May 1995.

KANO: Tomorrow is the 13th Anniversary of the episcopal ordination of Most Revd John N. Niyiring, OSA, 13th May 2008.

Entrance Antiphon
I will praise you, Lord, among the nations; I will tell of your name to my kin, alleluia.

Collect
Grant, we pray, O Lord, that, as we celebrate in mystery the solemnities of your Son’s Resurrection, so, too, we may be worthy to rejoice at his coming with all the Saints. Through our Lord…

In those days: Those who conducted Paul brought him as far as Athens; and receiving a command or Silas and Timothy to come to him as soon as possible, they departed. So Paul, standing in the middle of the Areopagus, said: “Men of Athens, I perceive that in every way you are very religious. For as I passed along, and observed the objects of your worship, I found also an altar with this inscription, ‘To an unknown god.’ What therefore you worship as unknown, this I proclaim to you. The God who made the world and everything in it, being Lord of heaven and earth, does not live in shrines made by man, nor is he served by human hands, as though he needed anything, since he himself gives to all men life and breath and everything. And he made from one every nation of men to live on all the face of the earth, having determined allotted periods and the boundaries of their habitation, that they should seek God, in the hope that they might feel after him and find him. Yet he is not far from each one of us, for ‘In him we live and move and have our being’ as even some of your poets have said, ‘For we are indeed his offspring.’ Being then God’s offspring, we ought not to think that the Deity is like gold, or silver, or stone, a representation by the art and imagination of man. The times of ignorance God overlooked, but now he commands all men everywhere to repent, because he has fixed a day on which he will judge the world in righteousness by a man whom he has appointed, and of this he has given assurance to all men by raising him from the dead.” Now when they heard of the resurrection of the dead, some mocked; but others said, “We will hear you again about this.” So Paul went out from among them. But some men joined him and believed, among them Dionysius the Areopagite and a woman named Damaris and others with them. After this he left Athens and went to Corinth.

Kings of the earth and all peoples,
princes and all judges of the earth,
young men and maidens as well,
the old together with the young. R.

Let them praise the name of the Lord,
for his name alone is exalted,
his splendour above heaven and earth. R.

He exalts the strength of his people.
He is the praise of all his faithful,
the praise of the children of Israel,
of the people to whom he is close.

ALLELUIA John 14:16
Alleluia. I will pray the Father, and he will give you another Counsellor, to be with you forever. Alleluia

GOSPEL
“The Spirit of truth will guide you into all the truth.”
A reading from the holy Gospel according to John (John 16:12-15)

Natural reason can lead men to the knowledge of God, but the self-revelation of the Triune God is make more concrete by the gift of faith. According to Pope St John Paul II: “Faith and reason are the two wings on which the human spirit rises to the contemplation of truth.” Paul discovered that the Athenians in their philosophical investigation did have this idea of God, though it was unclear to them. On seeing the alter to “An Unknown God.” Paul brilliantly tries to convince them of the existence of the one true God, who is not the work of any human hands but He created us and redeemed us in Christ Jesus. For in Him we live, move and have our being. May the Paraclete lead us to the complete truth!

We learn from one another each day depending on our level of humility and disposition to submit ourselves to the process of learning.

Our Blessed Mother Mary was brought up in the way of the Lord by her parent’s saints Joachim and Anne, she had a wonderful disposition and she learnt from them. She also taught Jesus when He was under her care and she also learnt a lot from Jesus. We must learn from her to teach and instruct others in the path of righteousness and also humble ourselves so that we can learn from others who can teach us the good things we do not know yet.


Prayer:
Lord Jesus Christ, help me through the power of the Holy Spirit, so that I will be an inspiration to those who look up to and come to me and may I be humble to learn from other people too in a positive way. Amen. And May the Almighty God bless you: the Father and the Son and the Holy Spirit. Amen.