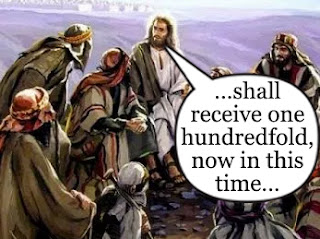 FIRST READING
He who heeds the commandments sacrifices a peace offering.
A reading from the Book of Sirach (Sirach 35: 1-12)

He who keeps the law makes many offerings; he who heeds the commandments sacrifices a peace offering. He who returns a kind- ness offers fine flour, and he who gives alms sacrifices a thank offering. To keep from wickedness is pleasing to the Lord, and to forsake unrighteousness is atonement. Do not appear before the Lord empty-handed, for all these things are to be done because of the commandment. The offering of a righteous man anoints the altar, and its pleasing odour rises before the Most High. The sacrifice of a righteous man is acceptable, and the memory of it will not be forgotten. Glorify the Lord generously, and do not stint the first fruits of your hands. With every gift show a cheerful face, and dedicate your tithe with gladness. Give to the Most High as he has given and as generously as your hand has found. For the Lord is the one who repays, and he will repay you sevenfold. Do not offer him a bribe, for he will not accept it; and do not trust to an unrighteous sacrifice; for the Lord is the judge, and with him is no partiality.

“Gather my holy ones to me,
who made covenant with me by sacrifice.”
The heavens proclaim his justice,
for he, God, is the judge. R.

“Listen, my people, I will speak; Israel,
I will testify against you, for I am God, your God.
I do not rebuke you for your sacrifices;
your offerings are always before me.” R.

“Give your praise as a sacrifice to God,
and fulfil your vows to the Most High.
A sacrifice of praise gives me honour,
and to one whose way is blameless,
I will show the salvation of God.” R.

ALLELUIA Matthew 11:25
Alleluia. Blessed are you, Father, Lord of heaven and earth, that you have revealed to little ones the mysteries of the kingdom. Alleluia.

GOSPEL
You will receive a hundredfold now in this time with persecutions, and in the age to come eternal life.
A reading from the holy Gospel according to Mark (Mark 10:28-31)

At that time: Peter began to say to Jesus, “Behold, we have left everything and followed you.” Jesus said, “Truly, I say to you; there is no one who has left house or brothers or sisters or mother or father or children or lands, for my sake and for the gospel, who will not receive a hundredfold now in this time, houses and brothers and sisters and mothers and children and lands, with persecutions, and in the age to come eternal life. But many that are first will be last, and the last first.”

Following Jesus entails complete detachment from worldly attraction and their glory. It is an invitation to a life of total commitment; an intimate relationship of love for God, obedience to Christ and holiness of life. The first reading presents us with the lifestyle of a virtuous man. His offering graces the alter of the Most High and his sacrifices are acceptable to God. In the Gospel, Peter asks the Lord: “What about us? We have left everything and followed You.” Jesus in response reveals to His disciple – priests and religious included – the plans of God for those who truly follow Him wholeheartedly, without any reservation.” …You will be repaid a hundred times over in this present age and, in the world to come, eternal life.” May we who have followed You, O Lord, never be disappointed.

St. Bede De Venerable, P.D.: An outstanding theologian, he combined contemplation and learning in his life as a Benedictine. Born in England in 672, he spent the whole of his life in the monastery, teaching, writing and praying. From the historical works that he wrote, Bede can be considered the father of English history. He died in the year 735, the only Englishman to have been named Doctor of the Church.

St. Geogory VII, Pp.: Gregory was one of the most important popes of the Middle Ages when the political power was trying to rule and dominate the Church. He was a Benedictine monk and, when he was chosen to be pope at the age of 53 in 1073, he struggled to reform the Church to eliminate various forms of immorality among the clergy. His stand on a number of issues brought him into conflict with the emperor Henry IV who forced Gregory into exile at Salerno where he died in 1085.

Mary Magdalene De’Pazzi, V.: Mary Magdalene De Pazzi lived in the difficult times of the Reformation. Because of her profound spirituality, she was able to help the leaders of the Church to Implement important reforms. Born in Florence in 1566, she joined the Carmelite nuns at the age of 16 and, leaving her baptismal name ‘Catherine,’ she took that of Mary Magdalene. She was given special graces of mystical prayer and had ecstasies and revelations. She died in 1607