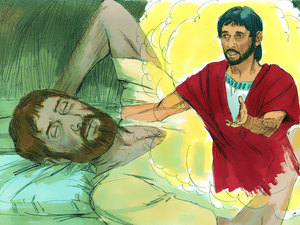 PORT-HARCOURT: Tomorrow is the 2nd Anniversary of the episcopal ordination of Most Revd P. Eluke (Auxiliary), 9th May, 1988.

You have been buried with Christ in baptism, through which you also rose again by faith in the working of God, who raised him from the dead, alleluia.

Almighty eternal God, who through the regenerating power of Baptism have been pleased to confer on us heavenly life, grant, we pray, that those you render capable of immortality by justifying them, may by your guidance attain the fullness of glory. Through our Lord…

In those days: Paul came to Derbe and to Lystra a disciple was there, named Timothy, the son of a Jewish woman who was a believer; but his father was a Greek. He was well spoken of by the brethren at Lystra and Iconium Paul wanted Timothy to accompany him; and he took him and circumcised him because of the Jews that were in those places, for they all knew that his father was a Greek. As they went on their way through the cities, they delivered to them for observance the decisions which had been reached by the apostles and elders who were at Jerusalem. So the churches were strengthened in the faith, and they increased in numbers daily. And they went through the region of Phrygia and Galatia, having been forbidden by the Holy Spirit to speak the word in Asia. And when they had come opposite Mysia, they attempted to go into Bithynia, but the Spirit of Jesus did not allow them; so, passing by Mysia, they went down to Troas. And a vision appeared to Paul in the night: a man of Macedonia was standing pleading with him and saying, “Come over to Macedonia and help us.” And when he had seen the vision, immediately we sought to go on into Macedonia, concluding that God had called us to preach the gospel to them.

R/. Cry out with joy to the Lord, all the earth.
Or: Alleluia.

Cry out with joy to the Lord, all the earth.
Serve the Lord with gladness.
Come before him, singing for joy. R.

Know that he, the Lord, is God.
He made us; we belong to him.
We are his people, the sheep of his flock. R.

Indeed, how good is the Lord,
eternal his merciful love.
He is faithful from age to age. R.

Alleluia. If then you have been raised with Christ, seek the things that are above, where Christ is seated at the right hand of God. Alleluia.

In his missionary journey St Paul takes Timothy as a travelling companion, as he believes wholeheartedly in collaborative ministry; he does not do it all alone. He trains the younger ones to walk in his footsteps, since Christ said, ‘The disciple will grow to be like his Master.’ This points to the fact that everyone has a role to play in the Church, which the Holy Spirit makes possible. In the Gospel Jesus makes known to us the cost of being a faithful disciple: “If they persecuted Me, they will persecute you too.” We need not be afraid to stand firm, for there is joy in the end. May Jesus give us the grace to truly serve Him and not count the cost!

The power of prayer and praise can never be overemphasised and it is something we see in the life of our Mother Mary, we are expected to let the Spirit of prayer and praise possess us. She was very apt and sincere in her praise to God. She sang the magnificat in thanksgiving to God for all He has done in her life (Luke 1:46-55). We must learn from her to be children of praise no matter the circumstances or situations we may pass through in life both good and bad. Make sure the praise of the Lord is on your lips and He will definitely make a way for you.

Heavenly Father, pour out your Spirit upon me so that He will help me to praise you in good times and in bad. May my prayer and praise win souls to you and may it make your glory to be made manifest in my life. Amen. And May the Almighty God bless you: the Father and the Son and the Holy Spirit. Amen.